(This blog was originally posted in December 2012)

It was a classic three-day moon; the old moon in the new moon’s arms; earthshine helped define the nearby sphere.

When the Moon appears as a slender crescent, a chewed off fingernail, a dazzlingly bright, nearly full Earth can be seen, reflected on the surface of the moon. The Earth’s brightness, due to reflected sunlight, is strongly influenced by cloud cover and recent studies of Earthshineindicate that it is more pronounced during April and May. A description of Earthshine, in terms of sunlight reflected by Earth’s oceans, in turn illuminating the Moon’s dark surface, was written more than 500 years ago by Leonardo da Vinci.

It’s called ashen glow, Earthshine, even Da Vinci Glow. It’s possible at this time of the lunation cycle when the moon is at the same relative distance from the sun, but waning.

Pretty, but so what. Well, scientists observe this reflection to measure the so called ‘albedo’ of the Earth, to determine the global cloud cover. This is so because oceans reflect less light than continents, approximately 10 percent, while land masses reflect from 10 to 25 percent, and clouds up to 50 percent. These calculations are helpful to determine differences in cloud covers throughout long periods of time, used principally in measuring the effects of climate change. The overall results obtained are still somewhat unclear, but nevertheless important to learn more secrets about this place we call home.

Jumpin’ Jupiter, Geminid Meteors, luny Moons. On clear nights in northeast Ohio, the astronomy hobby is looking up. Even the coyotes are happy. Just listen: Hooooooowooooo. 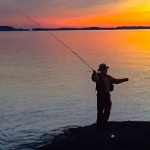